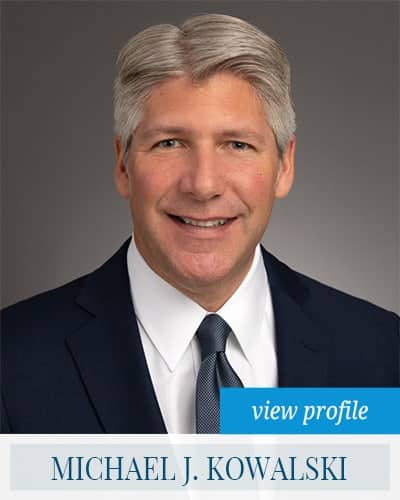 Attorney Michael J. Kowalski represents individuals and their families in personal injury matters. This includes cases of medical malpractice, automobile and truck accidents, nursing home negligence, medication errors, defective medical devices, premises liability, and psychiatric malpractice. He also counsels and represents clients in insurance bad faith and insurance denial matters. An experienced trial and appellate attorney, Michael has appeared before state and federal courts throughout Pennsylvania on behalf of seriously injured accident and malpractice victims. He is the medical malpractice lawyer you want fighting for you.

In 1997, Michael J. Kowalski argued a case of first impression before the Supreme Court of Pennsylvania that ultimately changed state law regarding what constitutes the rendering of or failure to render professional health care services. The case, Physicians Insurance Company v. Pistone, et al., has since been cited extensively on that issue. In 2004, Michael was elected to the Pennsylvania Trial Lawyers Association (now known as the Pennsylvania Association for Justice) Board of Governors where he served through 2007. He is also an officer in the Northeastern Pennsylvania Trial Lawyers Association and an active member of the Wilkes-Barre Law & Library Association Civil Rules Committee.

Michael is a past recipient of the Pennsylvania Bar Association’s Outstanding Leadership Award. He has been selected as a Pennsylvania Super Lawyer every year from 2009 to 2020. He was also selected for inclusion in The Best Lawyers in America® 2019 and 2020, highly regarded as the definitive guide to legal excellence.  His selection is for the practice areas, Medical Malpractice and Personal Injury. Michael has been recognized by the National Trial Lawyers as one of the top 100 trial lawyers since 2013; American's Top 100 High Stakes Litigators since 2017 and Best Lawyers in Pennsylvania as recognized by the Wall Street Journal, March 2019. He was also inducted into the Million Dollar Advocate’s Forum, recognized as one of the most prestigious groups of trial lawyers in the United States. Membership is limited to attorneys who have won million-dollar and multi-million dollar verdicts, awards, and settlements. Fewer than 1% of U.S. trial lawyers are members. Michael is recognized by the Worldwide Registry and has gained inclusion for the 2014 - 2015 edition recognizing executives, professionals, and entrepreneurs. In 2022, Martindale-Hubbell named Michael to 2022 AV Preeminent Attorney - Judicial edition.

Michael has also been selected as a member of the Nation’s Top One Percent by the National Association of Distinguished Counsel. NADC is an organization dedicated to promoting the highest standards of legal excellence. Its mission is to objectively recognize the attorneys who elevate the standards of the Bar to provide a benchmark for other lawyers to emulate. Members are thoroughly vetted by a research team, selected by a blue-ribbon panel of attorneys with podium status from independently mutual organizations, and approved by a judicial review board as exhibiting virtue in the practice of law. Due to the incredible selectivity of the appointment process, only the top one percent of attorneys in the United States are awarded membership in NADC. This class of advocates consists of the “finest leaders of the legal profession from across the nation”.

Michael J. Kowalski is admitted to practice before all of Pennsylvania’s state courts, the United States District for the Eastern and Middle Districts of Pennsylvania, the United States Court of Appeals for the Third Circuit, and the U.S. Supreme Court. He is a 1994 graduate of the Dickinson School of Law, where he was a member of the National Trial Moot Court Team and the Appellate Moot Board. While at Dickinson, Michael received the Governor Arthur H. James Memorial Scholarship for academic achievement. A resident of Moosic, Pennsylvania, Michael enjoys spending time with his family and pursuing numerous outdoor activities including golf and ATV riding.

Get Your No-Obligation Case Review

Injured? We have the skills and resources you need to build a strong personal injury case.

Distasio & Kowalski has an exceptional record of success in fighting negligent doctors and hospitals in Pennsylvania.

We understand your suffering and are here to legal representation if your baby is the victim of a tragic birth injury.

Misdiagnosis or delayed diagnosis can result in devastating injuries. Reach out to our firm for help.

Our attorneys are here to guide you through the process of fighting for justice after a serious car accident.

Our injury attorneys are experts at analyzing the evidence to determine cause and strengthen your truck accident case.

If you were seriously injured in a construction or industrial accident, our firm will fight aggressively for you.

We are injury attorneys dedicated to fighting for the rights and recoveries of families who have lost loved ones.